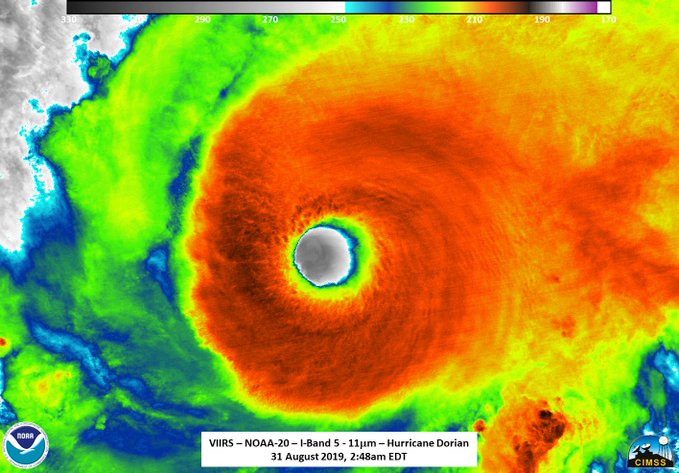 Hurricane Dorian was a long-lived, extremely powerful and destructive Category 5 hurricane that devastated the northwestern Bahamas and caused significant damage to the Southeastern United States and Atlantic Canada. It was the fifth depression, fourth named storm, second hurricane, and the first major hurricane of the 2019 Atlantic hurricane season. The hurricane caused catastrophic damage to Grand Bahama and Abaco Island, with at least 70,000 people left homeless.

Dorian developed from a tropical wave on August 24 in the Central Atlantic. From August 26 to August 28, the storm affected Caribbean nations and territories devastated by hurricanes Irma and Maria in 2017. Extensive precautionary measures were taken to mitigate damage, especially in Puerto Rico, where one person died. Damaging winds primarily affected the Virgin Islands where gusts reached 111 mph (179 km/h). The system gradually intensified while moving toward the Lesser Antilles, before becoming a hurricane on August 28. Elsewhere in the Lesser Antilles, impacts from the storm were relatively minor.